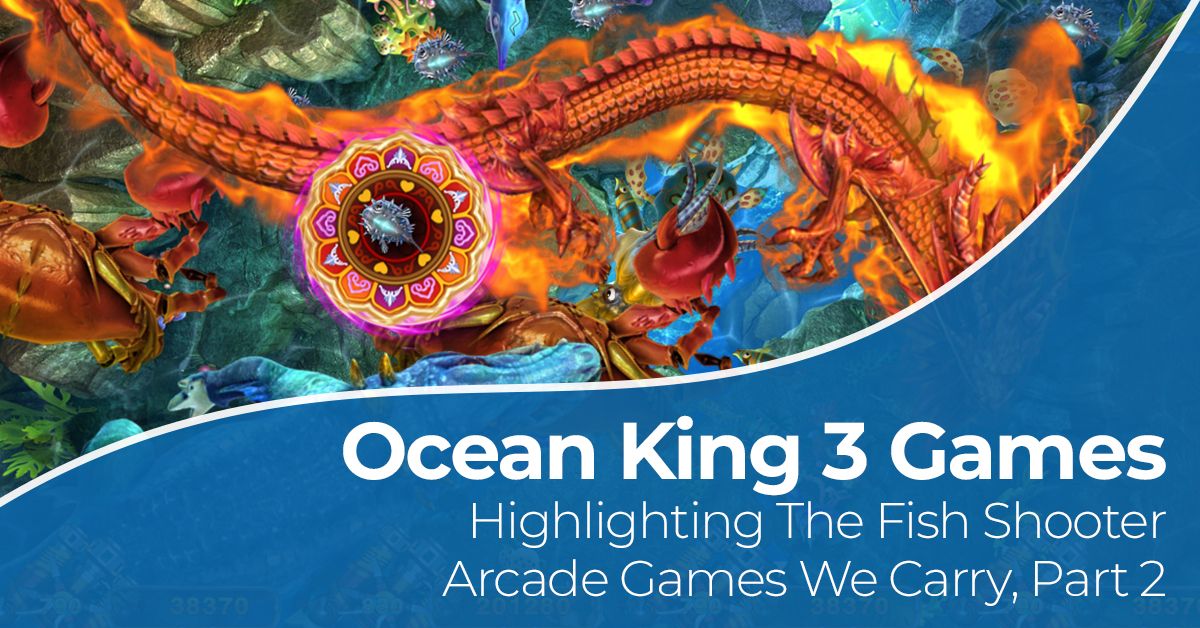 In part one of this two-part series titled “Ocean King 3 Games – Highlighting The Fish Shooter Arcade Games We Carry,” we were able to feature various aspects of Monsters Awaken and Crab Avengers, two of the most popular Ocean King 3 fish hunter games on the market.

In past posts, we’ve taken the time to highlight a few of our company’s strengths, among them being our commitment to provide lifetime customer care and our superior equipment. Additionally, we are the U.S.’ original and premiere distributor, manufacturer, developer, and designer of skill-based fish game cabinets and fish hunting games. So if you are looking for hunter game machines for sale, look no further than Fish Game Kings.

However, we have a promised blog topic to get to, and in the interest of respecting our readers’ time (and actually writing about what the blog topic says we will be writing about), let’s dive right in. Keep reading if you are interested in getting some specifics with regards to Ocean King 3: Turtles Revenge and Ocean King 2 – Thunder Dragon.

Turtles Revenge, like the game titles we discussed in part one, is jam-packed with new features and characters that everyone can enjoy, whether you are brand new to the world of fish hunting arcade games or you consider yourself something of a seasoned pro.

It shares a decent amount of common ground with the aforementioned Ocean King games. Specifically, six, eight, or ten players can play it at once, there are 28 fish to catch within the game’s time limit, and the difficulty level has been improved to Level 27. Newbies likely aren’t as concerned with that last fact, but if you are a vendor owner or manager looking to attract folks who are serious about the game (something you really should be interested in if you are serious about making money), getting the latest edition of this game is likely a wise investment. Once you get the word out, serious fish game hunters will find you!

There is a plethora of improvements to highlight, from double time with more odds to the inclusion of powered-up boss characters and featured fish. Additionally, the hopper speed supports are improved to 10ms.

In our spotlights of other Ocean King 3 games, we explained the various mini-games and gameplay features that the titles have to offer. Turtles Revenge, Crab Avengers, and Monster Awaken all share similar gameplay features and mini-games, among which are Laser Crab, Drill Crab, Fire Storm, Vortex Fish, Golden Treasures, and the like. The names are cool, but actually experiencing them while you play is something else altogether.

However, one other area of crossover can be found in terms of the Power Ups which all these fish shooting games share. Let’s look at a few of the ones that grab your attention while playing.

There are many other Power Ups we could highlight, but let’s move on to describe our final Ocean King fish hunting game of this two-part series — Ocean King 2 – Thunder Dragon.

The aim of Ocean King 2 – Thunder Dragon is largely similar to the other Ocean King fish arcade games; use your guns to catch fish in order to gain points and beat your opponents.

With Thunder Dragon, there is an improved difficulty, reaching all the way to Level 22. The game has added a boss character, Thunder Dragon (go figure), and flatfish to be captured. There is a double-time which offers more odds, Fire Storms with odds that reach 300 times greater than regular odds, and Hopper speed supports of 10ms.

The Fish Of Thunder Dragon

There are 28 fish, or sea creatures, technically, to be caught in Thunder Dragon.

Sure, there is a lot more nuance to the game, but watching or actually playing a game will give you a better understanding as to why these fish shooter games are so insanely popular. We could describe these titles in detail until we are blue in the face, but at the end of the day, you are going to want to find one and try it out for yourself. That being said, avid players care about the subtle distinctions between each game title, so if you are the owner of an establishment looking to boost your bottom line, you better believe educating yourself on the differences of these games should be a priority.

If you are interested in learning more about these skill-based arcade games and others like them, consider Fish Game Kings for our solid reputation and our commitment to providing our customers with life-long tech support. Whatever you need down the road, we are here for you with years of experience and knowledge. That’s the kind of difference going with the original and premiere players in the market will bring you.

Reach out to us today if you have any questions related to these Ocean King fish shooting games or otherwise. And be sure to check out our FAQs to see if it can’t clear up any lingering questions you might have. Either way, we’d love to hear from you and tell you more about why we are qualified to earn your business!