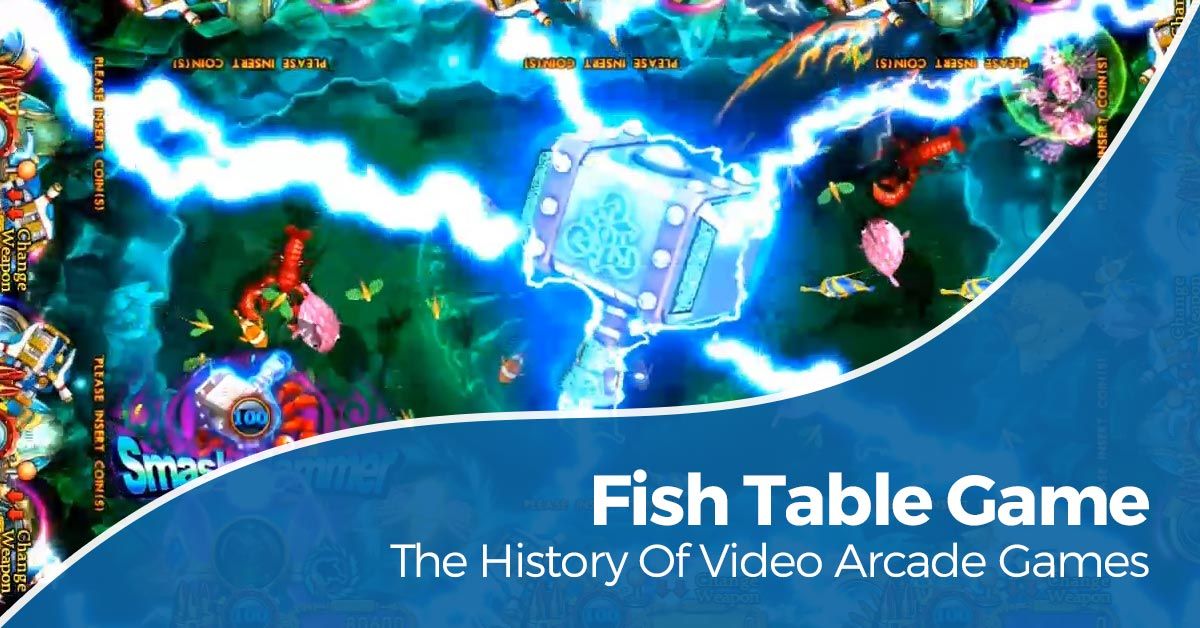 Regardless of however many names “the fish game” is known by, the important thing is that our readers and prospective customers know that Fish Game Kings is the original and premier developer, manufacturer, and distributor of fish game cabinets. We carry fish game cabinets, fish shooter games, accessories, and even custom games!

So before we dive into part two of our series highlighting the history of video arcade games, allow us to tell you why Fish Game Kings has quickly become one of the elite distributors of the fish table game!

We are excited to announce that two new games have just been released — Black Pearl and Monster Sponges Revenge are available for purchase from Fish Game Kings. If you are looking for a way to buy directly from a USA-based distributor, you can do that with us!

But whichever fish game title captures your attention, there is a good deal of commonality found between games. They are all skill games that create a lot of excitement wherever they are housed. Whether you set up a fish game cabinet at an adult arcade, a bar, convenience store, amusement park, truck stop, or somewhere else we’ve never even considered, there’s a safe bet to be made that foot traffic and revenue will follow wherever there is a fish shooting game being played.

These skill games create a social gaming environment for players to meet and pass the time together. But once the games start, things will take a competitive turn very quickly. Skilled players know that they can earn money if they are able to capture more fish characters (to earn more points) than their opponents. To be able to capture these characters, however, players must invest their own cash to be able to have the firepower to take the game’s characters down. This creates something of an arms race, which we are sure venue operators will like to see. The best players can make their money back, and then some, but no matter what happens in the game we are confident that the establishment will be pleased with their newfound revenue stream. It’s a win-win for players and venue owners alike!

BEYOND THE EARLY DAYS OF VIDEO ARCADE GAMES

In our previous post, part one of this two-part series, we took a look at the early days of video arcade games — the 40s and 50s. Most notably, the foundation was laid for future generations of video games. Cathode Ray Tubes, or CRTs, are an essential component of any video game. Interestingly enough, the underlying technology was first used in missile defense systems in the 40s, only to be repurposed for video games in later decades. As time wore on, the earliest tubes grew to be more complex, which in turn meant better graphics and general gameplay.

Now that we’ve reviewed a bit, let’s look at the middle history of video games. But before we do, a quick disclaimer: this is far, far away from being a comprehensive review of everything that has taken place from the dawn of video games to the present day. We simply want to shine the proverbial spotlight on a few notable happenings, along with a few of our favorite historical factoids related to the topic at hand. That being said, let’s get going!

Not too much of note happened in the 60s, from our vantage point at least. One event worth mentioning is that Steve Russell, of MIT, invented a computer-based space combat video game called Spacewar!. This was the very first video game that could be played on numerous computers, which is pretty dang neat if you ask us.

The 70s were an exciting time in our industry if for no other reason than this was the decade that saw the very first home console originate. Backtracking a few years to 1967, Ralph Baer, known as the Father of Video Games, developed a prototype multiplayer video game system that could be played on a television. This original console, which could also host multiple programs (games), was known simply as “The Brown Box.” Once Magnavox bought the licensing rights to the console, it was commercially distributed as the Odyssey in 1972.

Though the Odyssey and its rudimentary functionality would quickly fade from popularity, one of its games served as inspiration for Atari’s Pong game, which, as most of our readers should know, is the first arcade video game. Interestingly, Magnavox ended up suing Atari for copyright infringement. Atari eventually settled, with Magnavox winning over $100 million in copyright damages that had to do with the Odyssey.

The decade rounded out with nothing less than a boon of milestones: Nintendo created Donkey Kong, Japan introduced the United States to wildly successful Pac-Man, and Space Invaders was released as an arcade in 1978.

It seems we’ll need to turn this two-part series into a three-part one, which is just fine by us! While you are waiting for the final installment, why don’t you reach out to us if you are interested in learning more about how installing a fish game cabinet can help bring in a healthy new revenue stream for your establishment. We’d love to hear from you!