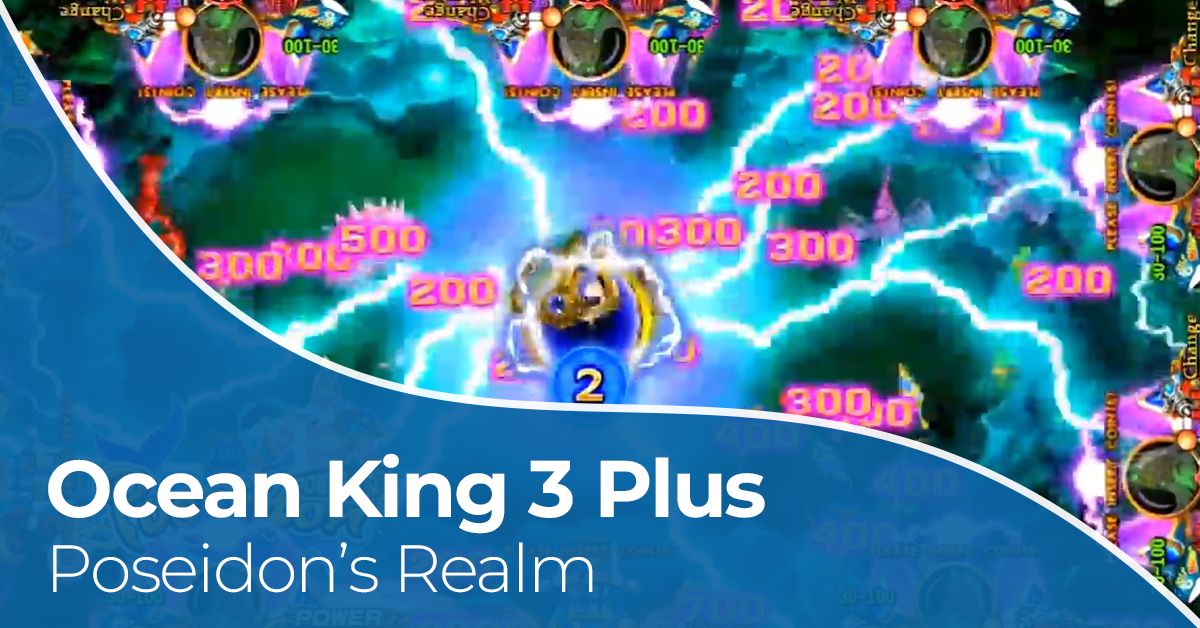 We could list others, but we’d rather explain more about what we do in general and who our game cabinets are for before getting to the main event — highlighting the latest fish shooter game, Ocean King 3 Plus Poseidon’s Realm.

If they don’t, we think it’s a safe bet to say that they will be more significant shortly. Why? We’ve been a part of the fish arcade game industry for longer than anyone else in the country, and with that experience comes the privilege of having strategic relationships to support our clients better than anyone else in the business. From the superior power supply options in order to prevent burnouts to an improved micro switch in the push button to our proprietary Fish Game Kings Anti-Cheat Alarm System, going with the top fish game manufacturers and developers just makes sense.

FISH GAME KINGS: WHO WE ARE

Fish Game Kings, Inc., is the original fish game company that is exclusively committed to manufacturing and game development in the USA. That makes us the premiere choice for folks looking for a company that develops, manufactures, designs, and distribute arcade game and arcade equipment. But because we realize that we aren’t the only players in this industry, nothing has stopped our drive to be the best at what we do. That’s what gives our customers, many of whom have become long-term clients, the confidence to shop from Fish Game Kings. Whether owners of establishments (we’ll get to what kind of establishments below) seek fish hunter arcade games, fish game cabinets, or a fish game manufacturer, they are wise to turn to Fish Game Kings for affordable and reliable products.

What Sets Us Apart

Another differentiating factor we pride ourselves on is that we are able to produce our products and equipment at our very own state-of-the-art facilities, right here in the USA. Being able to closely monitor and control our manufacturing processes means we have a detailed grasp on day-to-day work. For customers looking for long-lasting arcade game cabinets that won’t break down in months or even years, that can make a huge difference.

We are aware that establishment-owners who are in the market for our fish games purchase our hunter games as an investment — expected ROI is a determinant factor in the decision-making process. We offer exceptional levels of reliability and customer service, so that just in case something does get a little wonky down the road, you’ll have the best in the business on-hand to quickly solve your problem and get your revenue-stream flowing smoothly yet again.

On top of that, we are fortunate enough to have a variety of strategic relationships in more than a few states. This helps us support our clients’ unique requirements and requests both accurately and efficiently.

Experience matters in any industry, but the more niche the industry you are discussing, it’s a safe bet that the more experienced specialists are, the more capable they are of delivering high-quality products and services.

To apply that general principle, we’ve been an active participant in the fish game industry than anyone else in the United States, quite literally. As such, we’ve been proud to play a key role in the reengineering of the fish game table. Specifically, we’ve improved its structural integrity, gauge wiring, improved its micro switch in the push button (for increased precision and improved user experience), higher-quality speakers and monitors, improved power supply, and beyond. At the risk of tooting our own horn just a tad, there is a reason we are the Top Rated National Fish Games manufacturer and developer. That’s why we hang our hat on the two pillars of our company — superior equipment and lifetime tech support.

WHO ARE OUR FISH GAME CABINETS FOR?

Excellent question! We are thrilled it’s been posed. Business owners looking to establish a substantial revenue stream will be thrilled to hear of our fish hunter games and their versatility as it relates to venues at which they are used. These game venues include skill game rooms, sweepstakes cafes, Frankie’s Fun Parks, restaurants, bars, bowling alleys, truck stops, amusement parks, Dave & Busters, adult arcade centers, Chuck E Cheese, grocery stores, and beyond!

Perhaps you are wondering why myriad venue types are consistently interested in utilizing fish games in their game rooms. For one, fish shooter games are dramatically increasing in value. Some people call them one of the hottest new skill arcade games on the market, and we wouldn’t disagree.

From a purely visual perspective, fish game cabinets bought from Fish Game Kings are captivating, to put it mildly. Each cabinet boasts 55 inch LED monitors, high-quality bill feeders (that won’t antagonize customers), and featurers 2, 4, 6, 8, and 10 player units. As more and more people play, the excitement builds in a palpable way. More and more people will want to play, the demand will increase, which has the net effect of earning higher revenue. It’s a competition-based game, so you are not only playing an stimulating arcade game, you are playing against friends, or who knows, even pseudo-enemies! This game is highly popular in the United States for that very reason.

We have the following titles available, including our own proprietary software developments.

Keep in mind you can also develop your own game board through Fish Game Kings. We have everything you need to bring your vision to life. We offer developing services, so just shoot us your ideas and we’ll come up with a plan of action you are excited about. Of course, there are minimum order quantities to keep in mind, but contact us for specific quantity and pricing information, as these are typically given on an ad hoc basis.

Here we are at last — we’ve arrived at our promised blog topic. Given that we don’t intend on making this post a veritable novel, perhaps we’ll make this a two-part series, so we can highlight Ocean King 3 Plus Poseidon’s Realm in complete detail.

Ocean King 3 Plus Poseidon’s Realm is a new fish shooting game for arcade play that is quick-trigger, fast-paced, invigorating, and downright borderline addictive. Not literally of course, but you might have to exercise self-control so that you can let your patrons get a turn or two! Of course, if your intentions are simply to enjoy yourself, get the fish shooter game for entertainment purposes, by all means! If you are interested in getting serious ROI while establishing a consistent group of regulars, all you have to do is set up the machine and watch the gamers flock!

The game features swimming dragons, Poseidon himself, swimming sea creatures that half-distract you, half-invigorate you as part of the overall gameplay. Like any arcade game cabinet, players will use a joystick to aim their weapons and attempt to capture the various sea creatures. Doing so will give you points. If your shot value is high, meaning accurate, you’ll get more points. But bigger sea creatures generally take more shots to capture. Part of the subtlety of the game is that multiple players can shoot at the same creature, but only the player that makes the killer blow will collect the points. Some players prefer to let others do the heavy-lifting, only to sneak in at the end and take all of the glory! Hey, it’s a legitimate strategy.

That’s probably sufficient for part one of our two-part series on Ocean King 3 games for sale. So Keep an eye out for part two, in which we’ll dive into greater detail on our latest Ocean King fish game available!